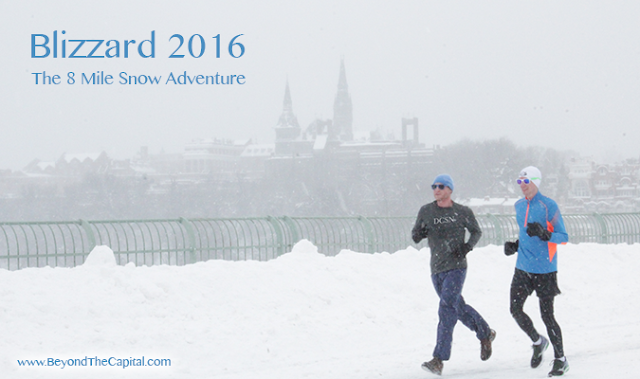 On Saturday afternoon the Washington DC Area was hit with one of the biggest snowstorms of all time. The conditions outside at times were downright nasty and it led to a whole lot of snow and a whole lot of non plowed roads.

Well I love going out in the snow, and I love even more showing people that life is possible without using a couch during a snowstorm in the DC Area. So I woke up around 8am early on Saturday and headed out into the storm with my Vine handy phone to report (and get in shape).

On my 8 mile round trip hike from Ballston to Georgetown I ran into a bunch of psychotic people. Like a boat load. Here are the top 8 most annoying people I ran into during the blizzard (keep in mind, that unlike a Buzzfeed list, I actually took all the crappy photos, I didn't steal them from other people's sites): 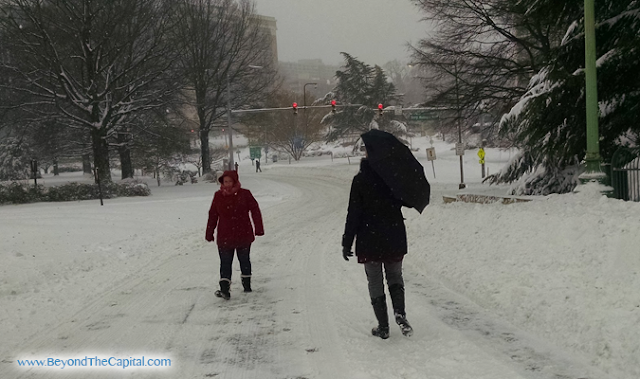 One of the first crazies I saw was walking around twirling an umbrella on her shoulder. Between the wind blowing the thing inside out and the snow coming from just about all angles besides up, I just thought this was a silly look. She seemed to think she was setting a trend, however, there were def clouds in her stones...or something. 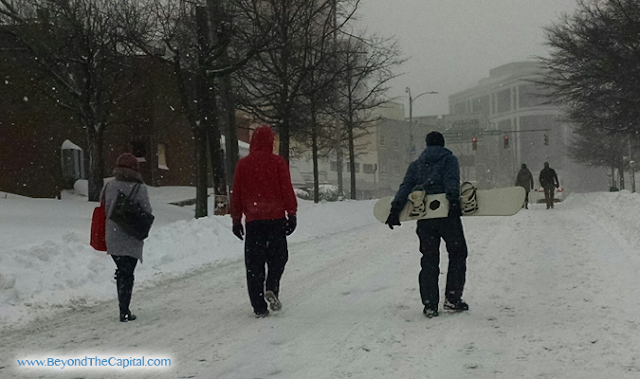 These guys most likely spent the entire day looking like the guy in the picture. Walking around looking for some kind of hill to snowboard on. There were no boned out rodeo flips sandwich style to be had on this day. 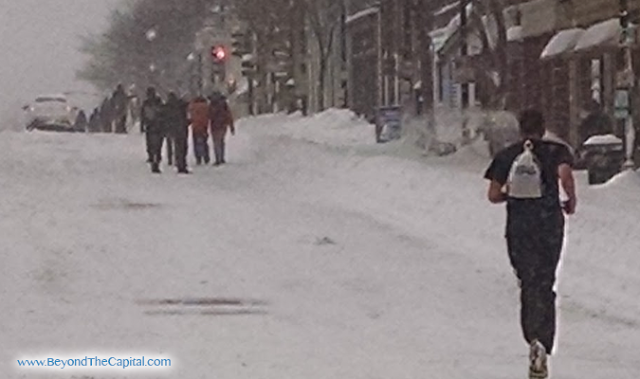 I really hope this was a single occurrence but I can't help but think it was happening all over the city. His arms were redder than the stripes on the American flag (the red ones). He also was being heckled by everyone he passed...The lame free drawstring backpack did not help his case. 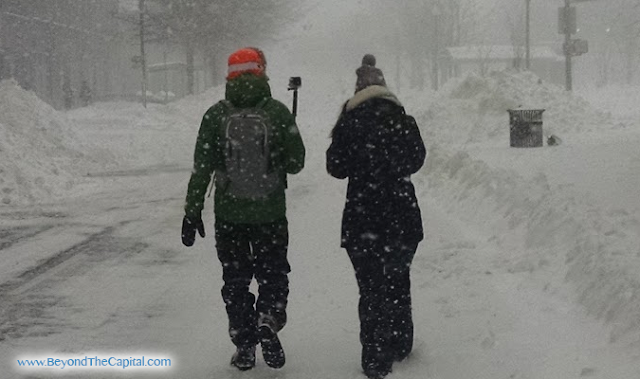 This guy walked around the entire day in a romantic setting holding, not his girlfriends hand, but a selfie stick so he could record HIS (not their) boring walk to cherish forever. Proof that anyone can find a girlfriend. 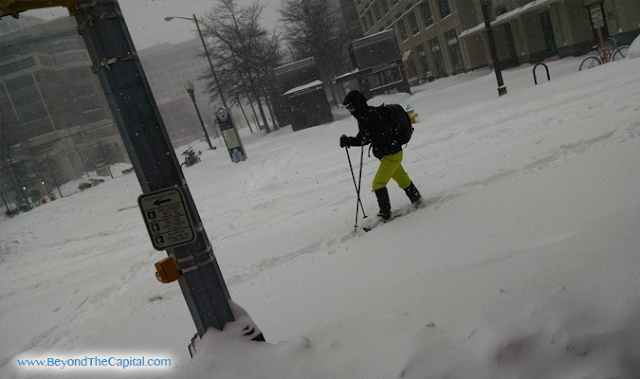 And then there were people like the woman above who thought they were on top of Mount Everest with Jake Gyllenhaal. There were toddlers walking through the snow and yet this lady needed the Bear Grylls snow survival kit. I guess when you waste your money you have to justify it somehow. 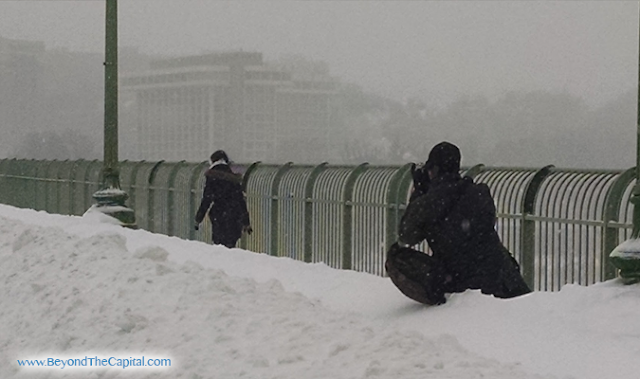 These people were all over the place. They were hidden around every corner. Camera geeks. Once the first flake falls they grab their microfiber cloths and their lens kits and hit the streets. Yes your pictures are better than my phone Instagram pics. I look forward to seeing them 6 hours after you get home. And yes I know they will be in black & white. You are an artist after all. 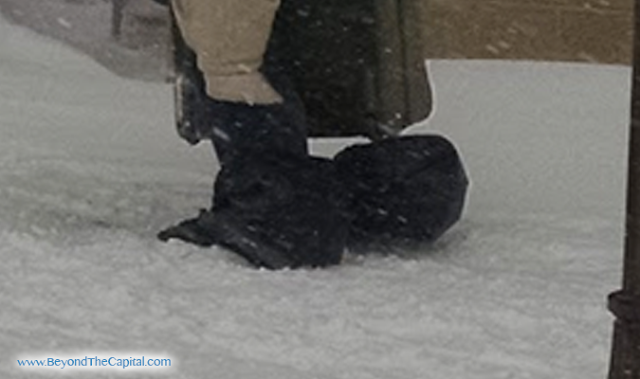 The pic above wasn't the best example of these people. She had a suitcase in her hand so was obviously not prepared. But with 30 stores open the only thing she thought to get were industrial sized heavy duty hefty trash bags? Needless to say it wasn't working very well. There were also dudes wearing Jordans with sandwich bags on them, and I really wish the pictures came out better.


8. The Keep It Classy Crew 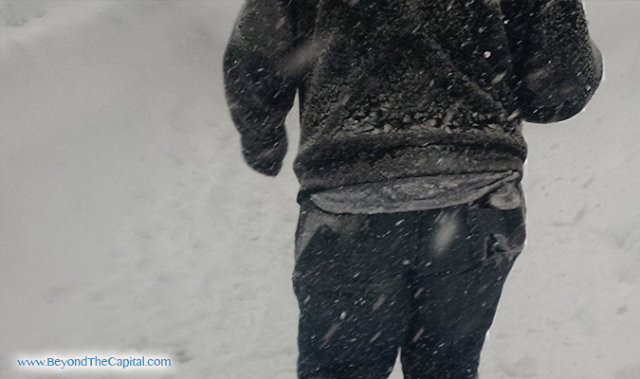 It might be hard to tell but that is a Natty freaking Light in the back pocket of her ripped to shreds jeans. There were several people out drinking in the snow, which is fun, but not pouring it into a cup because you think you are cool is just lame. They think because they have a bottle in their hand they are the only one drinking. Lol. We are ALL drinking.  And when you cram a crappy beer into your pants, you aren't impressing anyone. 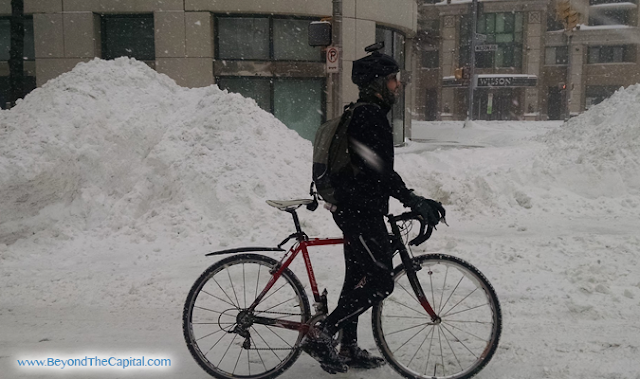 Once word got out that there were people on the streets with skis the bikers had to be out there. They were even slowing down the traffic like on a clear day. I wouldn't be shocked if they went up to a plow driver and asked when they were going to be plowing the bike lanes. This guy even has a camera on his helmet...UG.


BONUS: The girl in public in pajama pants.

I don't even have a picture of this. It is annoying when I see it at noon at a bagel shop on a Sunday and even more annoying in the middle of a snowstorm.

So those are just some of the lovely people I came across on my day out on the street. You might even say that I was the worst of them because I was walking around recording it all. If you live in Arlington or DC and it snows you should take advantage of how easy it is to walk around. I had an awesome time.

DON'T FORGET TO CHECK OUT THE TOP 8 VINES FROM JONAS!